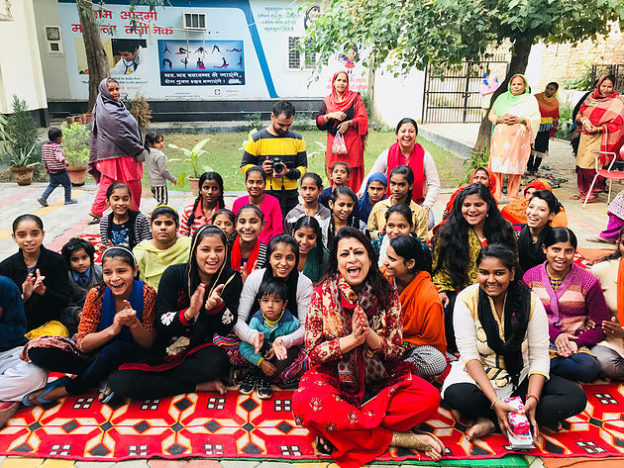 A city like New Delhi is a study in contradictions. It is home to a plethora of people coming from all walks of life, not all of whom have access to clean surroundings and basic sanitation services.

Suparnaa Chadda is a women’s rights activist, media professional and founder of Women Endangered India (WE) & ‘Simply Suparnaa’. The philanthropist in her is dedicated to making a difference, in any capacity she can. In this instant, we were headed to the Sur Nirman society for a session on menstrual hygiene.

Recently, we travelled to WE’s camp in East Delhi. The Patparganj jhuggi slum is surrounded by large buildings and bungalows, where a lot of the residents go to work. They come back home to dingy by-lanes and cramped houses where accessibility and hygiene are constant problems.

After walking 300 metres into the slum and entering past a small unassuming gate, we reached the Sur Nirman Educational & Cultural Society, a place that bore little resemblance to its unclean surroundings.

We are greeted by enthusiastic people who are glad to see Suparnaa again. This is the second visit Suparnaa has made to Sur Nirman. The Women Endangered (WE) team organised this session to sensitise women about the importance of menstrual hygiene and reproductive health. The idea was simple – take the shame out of menstruation. As WE says, #LetsTalkPeriod!

The hesitation, shame and stigma attached to menstruation is one of the most prominent causes contributing to poor reproductive health in India. WE addressed it head on with a conversation on what menstruation means, the importance of hygiene and the best menstrual practices to be followed. She also addressed the concerns of the women, who while residing in the heart of the Indian capital, one of the largest metropolitan cities in the world, struggle to access proper hygiene practices.

Suparnaa engaged the audience with anecdotes in the vernacular tongue so that the participants could appreciate and connect to the matter being discussed. She steered clear of technological help, such as that of PowerPoint presentations and visuals on a large screen. Instead, she used a scale replica of the uterus, and posters to demonstrate and talk them through the processes. Her approach was simple, engaging and effective.

The session brought together 70 women, from adolescent girls to their mothers. Suparnaa broke the process of menstrual hygiene down to 7 key habits, attributing each of them to the seven musical notes, the Do Re Mi Fa or Sa Re Ga Ma as we Indians know it. WE also touched upon sustainable solutions to menstrual hygiene, with Malini Parmar talking the women through the benefits of adopting the Menstrual Cup. This environment-friendly option can serve as an alternative to the existing methods of maintaining menstrual hygiene.

In an effort to help them maintain a healthier lifestyle, WE distributed 70 units of menstrual cups to the women. An interesting take though was the fact that the women could purchase the units worth INR 900 per piece for INR 10 each. This was done to ensure that the women had a strong incentive to use the menstrual cups and not discard the handouts. What’s commendable is the fact that WE took the contact details of all the women who took the menstrual cups and plans to head back in three months to check on the progress made.

A small effort by one individual mobilised another to join the cause, and realised a session that could change a big part of the lives of 70 women!

Needless to say, this is just a drop in the ocean and the battle to effect behavioural change is long, but WE is sure moving forward one step at a time. 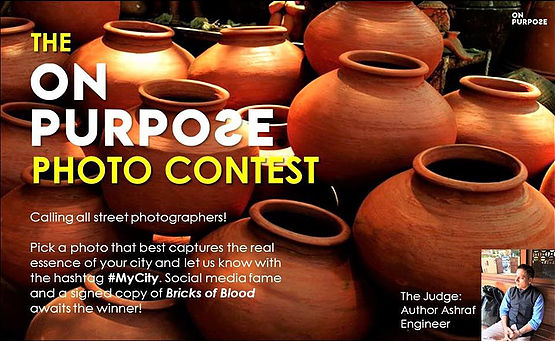 All the Fun Outtakes from The ON PURPOSE Photo Contest

The On Purpose Photo Contest, the first of its kind, ran between November 14th and December 2nd, 2017.

The following is a list of the brainwaves, plans, and observations that happened behind and during the contest. Because we believe in record-keeping!

PSST: To purchase a Kindle edition of Ashraf Engineer’s book, Bricks of Blood (that inspired this photo contest) click HERE

In acknowledgement of the demand, we extended the contest by a day. Who doesn’t like one extra day of something so fun?

Ashraf engineered (he he!) a surprise before the announcement of the results. There would be three winners instead of one, and each of them would be sent a signed copy of ‘Bricks of Blood’! Admittedly, he had a tough time picking the winners, but he wasn’t complaining.

Needless to say, every step of the way was a fun, learning experience. Photography can bring people closer, and we sure did make some new talented friends!