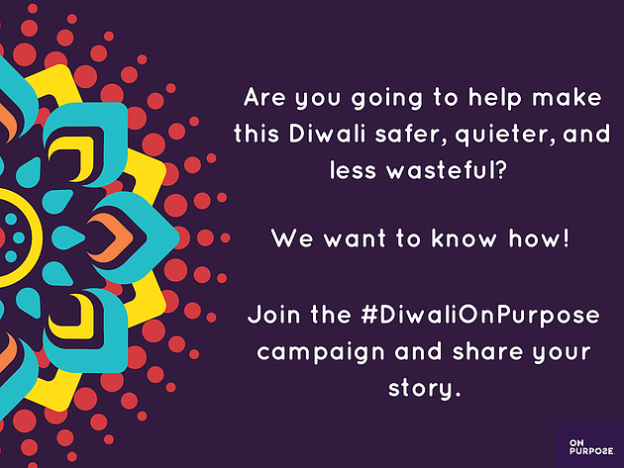 This Diwali, with a ban on firecrackers firmly in place, we were inspired to look beyond clicktivism and to find out what people were actually doing to make the festival season easier on the environment. We sought out passionate people who walk the talk, and have been for years leading by example, through a campaign titled #DiwaliOnPurpose.

Srishti Sharma, Associate Manager at OnPurpose Consulting, led the way by purchasing earmuffs for all her friends’ pets! “The idea was to do something. Plain and simple. Even the littlest of actions that made the festival a little more special, not just for you but for someone else too.”

Paarul Chand, the editor of PRmoment India magazine, who is also a mental health activist and a therapist, joined the campaign and told us about protecting her adorable pet, Linus from all the noise with the help of cushiony velvet earmuffs as well.

The cuddly pooch raised the baton for the people who suffer helplessly during the Diwali season – our pets and other animals.

We were stoked to receive a video from Delhi-based businessman (and wonderful flautist) Varun Sharma expressing his happiness about the Indian Supreme Court’s decision to ban firecrackers in the Delhi-NCR region. “I am going to be gifting people indoor plants this Diwali,” he says in the clip.

For Bengaluru-based graphic designer and illustrator Kshiraja Krishnan, going green this Diwali was a no-brainer. Her #DiwaliOnPurpose statement mentioned the abusive production trail that firecrackers travel before landing in our homes. We loved her no-nonsense explanation!

This campaign aimed to highlight stories of action. Because a deed done right, and on purpose, can help change the world!