ON PURPOSE / One Year of On Purpose – Playing Games at Buguri Community Library in Bangalore.

What’s the best way to spend a Sunday morning? Relaxing on the bed with a good book for company is a great idea. But, a better idea is to spend it with a group of young, enthusiastic readers at a beloved library!

Buguri the community library officially came into being in January 2017 in a two-room flat located in Banashankari in Bengaluru. The day was marked by gregarious children from the nearby community and many volunteers coming together to paint the walls of the space. Together they painted images of clouds and birds, and animals, and parachutes, and a giant spinning top on the bare walls. ‘Buguri’, by the way, means ‘spinning top’ in Kannada. Today, these walls enjoy the company of hundreds of books in multiple Indian languages, all donated by readers who want the joy of reading to spread farther. 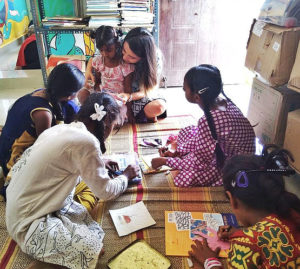 On Purpose officially came into being in April 2017. As the realisation of completing one year dawned on us, we thought that it was time to deepen and widen our commitment to social change. The past year was marked by a lot of work, a lot of travel, and lots of meetings with many, many interesting people who continue to inspire us. So, naturally, in this new year of existence, we will continue doing that and getting closer to the grassroots of change-making. 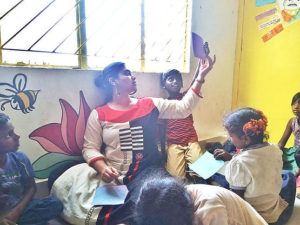 What were we doing at Buguri? Quite simply, playing! Lakshmi Karunakaran from the NGO Hasiru Dala helped us plan a fun event with the children to mark the On Purpose first birthday and armed with a big box of chocolates and juice packs, we were ready to put it into action!

The fun began with some circle games to get the children in the mood. Then, we began enacting ‘This is Our House’ by Michael Rosen. This simple but beautiful story relates the tale of a child who becomes so possessive of a small box/enclosure in a park that he dismisses the entry of any other friend by making increasingly silly excuses. But, when nature calls and he is forced to leave the box for a bit, the friends invade and refuse to let him back in! The enactment was meant to enforce the ideas of sharing and inclusivity, especially the idea that the community library is for everyone and no one should be shunned on any excuse. Needless to say, it was a riot! 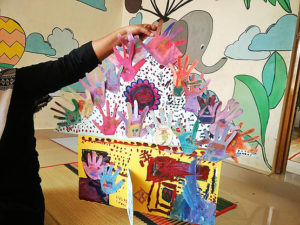 We moved on to craft activity next, drawing outlines of the children’s hands on coloured paper which they then filled in with their own idea of a dream home. These cut-outs were then stuck on to a huge cut-out of a house which will be on display at the library.

It was a morning filled with laughter and a lot of paper-cutting! And, we loved it! Thank you, Kshiraja Krishnan and Sangeetha for helping us make this special!