ON PURPOSE / ‘Woman Entrepreneur Award’ by The Ethel Prabhu Foundation. 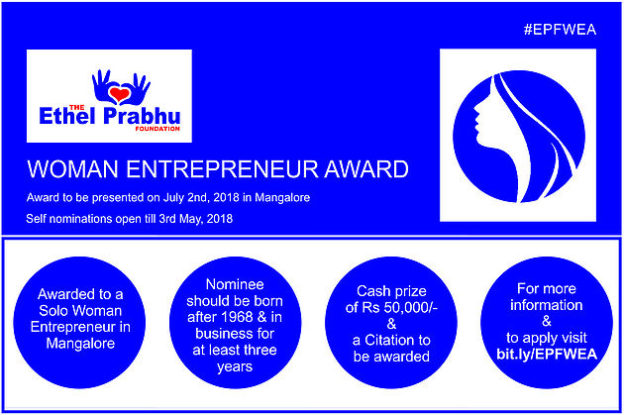 The Ethel Prabhu Foundation was created to keep alive the memory of an ordinary and simple woman called Ethel Prabhu who was ahead of her times. She stood by these values during her two decades of work as a school teacher across four cities – Equality, Excellence and Empowerment.

Ethel Prabhu was my mother. She passed away in 2001 at the age of 51 due to a cardiac asthma attack. She was a school teacher and had returned from a regular day at work about three hours before she breathed her last. Her life mission had been to give to others, and this had remained incomplete. In order to continue her spirit of serving others, the Foundation was informally established in 2001 in Karnataka with the launch of the annual ‘Best Teacher in the State Award’. This award carries a cash prize.

There are also a few other initiatives that are run by the Foundation to benefit lesser privileged students at the Ferrando Speech and Hearing Centre in Shillong and at St. Aloysius High School, Mangalore. The Foundation also supports students at the School of Communication and Reputation, sponsors prize money at the Knowledge Factory, and the awards the ‘Woman Entrepreneur Award’ in collaboration with St. Agnes College.

The vision for the organisation is that by 2020, there be a dozen initiatives that inspire others to take up similar work. All it takes is determined effort and a few thousand rupees to start. Eventually, these philanthropic activities create an impact and build a set of people who equipped to achieve their goals. Currently, the Foundation makes grants worth Rs 6 lakh annually. These include scholarships, prize money, interest-free loans and knowledge events.

The late Ethel Prabhu did her under-graduation studies between 1968 and 1971 at St. Agnes College, Mangalore. This year marks 50 years since she first entered college. She was a teacher par excellence and was one of the first Indian women who went as a high school teacher, when barely 24, to Hong Kong to teach English and Social Sciences in 1974. She taught at the St. Joan of Arc School for three years before returning to India.

She was also a closet entrepreneur who made handcrafted wines, pickles and preserves in order to earn extra money so that her sons could have a better life. Her dream was to start her own food business by opting for voluntary retirement. But, she could not realise the dream as her life was cut short.

Since the Ethel Prabhu Foundation supports a dozen causes that have been instituted in her memory, here’s one that will celebrate a woman entrepreneur annually. The Woman Entrepreneur Award is a cash prize of Rs 50,000 to be given to a woman in Mangalore who has been a solo entrepreneur for at least two years and is under the age of 50. The Award will be presented during the annual Mother Aloysia Endowment Lecture at the St. Agnes College in Mangalore on the first Monday of July.